Cinderella visits us this fair early fall day and tells a tale worthy of Shakespeare, a tale written and played out by one most beloved…

Twelve O’clock, twelve o’clock,
This is the price she paid.
The night was special,
Her first masquerade.
A dance, a waltz, in three of four,
Till twelve, till twelve, all she can afford.

My son wrote this poem while in his freshman year of college, if I remember correctly. As a belated Mother’s Day gift that year, when he came home that summer from his university, he and his sister made me a hand-sewn book with a collection of poems he had written and artwork drawn by my daughter.

Love this book and my kids! 💞

This fall I am excited to keep our Fairy Tale stories going, continuing a theme begun a few years ago… Earlier this week I shared making a French-styled Cinderella slipper out of a cardboard shoe insert.

For late summer-early fall, I decorated the mantel a few weeks ago with soft velvet pumpkins, little gilded acorns and Baby Boos and our little lady statue. The large clock face brought back from California has been up on the mantel since we arrived home in early summer, so the idea of Cinderella began there with “Cindy” running out of time…

An ethereal look is what I was going for in this year’s early fall look. I love the idea of attending a ball so I asked Mr. Ethereal if he would bring down our fall boxes when he was up there. Inside those boxes, the soft pumpkins and white sparkle pumpkins are what spoke to me.

As per Wikipedia, the French version of Cinderella was written by Charles Perrault ~ Cendrillon, ou la Petite Pantoufle de Verre, with the thought that the original version is “Rhodopis,” an Egyptian tale “recorded by Strabo, a Greek historian, in the first century.”
Of course, many of us remember Julie Andrews first-ever movie role as Cinderella in Rogers and Hammerstein’s musical adaptation created for television, and first shown in 1957 (also linked to the French version, above). 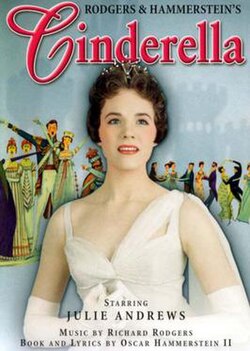 Of course, I love Disney’s animated version of Cinderella! Who doesn’t?!! In the classic fairytale, Cinderella’s coach is magically created from a pumpkin. I submit a few homemade pumpkins for your approval…
I forgot to create a new scene under the new glass cloche but it is a perfect vehicle for future Cinderella scenes under its glass dome!
I did remember to create a few glass slipper photos near the glass cloche…

The whole ethereal fall mantel for you… How are you decorating your mantel and home this fall? Loving Cinderella’s mantel…
Sharing with
All About Home ~ Follow the Yellow Brick Home
An Enchanted Evening,

This site uses Akismet to reduce spam. Learn how your comment data is processed.

Hello and welcome to my little corner of the blogosphere! My name is Barbara and I live in North Central Texas and am California transplant {five years now}.

I am an artist and designer at heart sharing my home, decorating ideas, sewing tips, gardening, woodworking, painting and crafting all in Faith and with you in mind.

Pour yourself a cup of hot tea and come sit a spell! I’ve come to think of my blog like our letter writing of days gone by ~ we are old friends, pen pals!!!

I am so glad you are here!
Enjoy your visit! 🙂